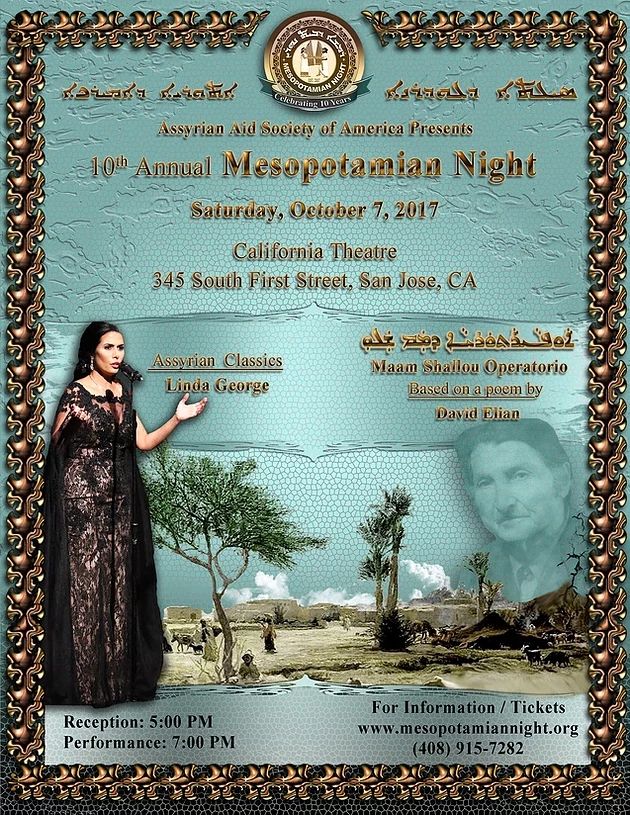 For over a decade, the Assyrian Aid Society of America’s Mesopotamian Night cultural programs have presented the works of our legendary musicians, lyricists, poets, and vocalists to support the AAS-A humanitarian mission as well as to support and sustain our Assyrian culture.

We created hope where there was once none and vowed that our ancient culture, language, and arts would survive and prosper.

On October 7th, 2017 at the historic California Theater in San Jose CA, the Assyrian Aid Society of America is proud to celebrate the tenth year anniversary of Mesopotamian Night.

Join us as the Mesopotamian Night Choral Ensemble & Symphony Orchestra led by conductor John Kendall Bailey present Giuseppe Verdi’s “Pensiero” from the Opera Nabucco, sung for the first time in the Assyrian language.

This year will also feature the Operatorio Maam Shallou – based on a poem by the prolific Assyrian writer David Elian, which depicts the ordinary life in an Assyrian village and the struggle between good and evil.

And back by popular demand, and for the second year in a row, we are proud to present Linda George featuring a new repertoire of her most popular songs accompanied by the Mesopotamia Symphony Orchestra.

Join us for the most successful humanitarian and artistic event of our time: Mesopotamian Night.